The look of the H500X family was established by the H500P late last year, and the cases that followed all share the dual 200mm RGB intake fans and a similar front panel. The H500 steers further away from the original than the others, though: most obviously, the top of the case has an odd hump at the front, similar to the old HAF 912/922/932s. On the 912, this was advertised as a “top platform for personal belongings,” but it’s more practical on the H500, hiding a plastic handle for lifting the case. It’s not as bulletproof as a metal handle would be, but it’s fine for lifting the case onto a table, and these days that’s about the only reason anyone needs to pick up a PC.

The H500 does have one feature that we’ve criticized time and time again: a big, unventilated acrylic panel. The key difference with the H500 is that the acrylic is an optional accessory included with the case, and it can be left in the box where it belongs. The stock case is fitted with a big rectangle of mesh, similar to the one we praised in the H500P Mesh, which can be swapped out by removing 8 screws (no adhesive this time). We don’t recommend doing that, but having the choice comes out to a net positive. This is finally a way for Cooler Master to have their cake and eat it too, without releasing two different product SKUs or selling alternate front panels separately.

Taking the front panel off to clean the filter or swap out the mesh isn’t too easy (like the original H500P) or too hard (like practically every other case). There are four plastic tabs holding it on, nothing fancy, and it’s tight enough that it won’t fall off when picking the case up. The top panel isn’t removable at all because it’s part of the chassis. There are no fan cages this time around, but since the fan screws are directly accessible from the outside of the case it’s unnecessary.

It’s invisible when the case is assembled, but other H500X cases have a little mesh “apron” covering the intake at the bottom of the front panel. It’s fragile, it makes them painful to pick up, and it always felt like a design afterthought. In the H500, the filter is built into the front panel instead. This is an extremely minor feature, but it’s an indication that Cooler Master’s engineers are really working on improvements, even ones that aren’t externally visible.

There is a vertical GPU mount, and we’d normally test this and write a short segment in the thermal section about how mounting air cooled GPUs flush with a side panel is a bad idea. Cooler Master saved us the time by making the vertical mount single-slot, so liquid-cooled cards are practically the only thing that will even fit. Like the interchangeable front panel, that’s a clever move--it adds value to the case, and we can’t complain about how bad it is for air cooled cards, because air cooled cards don’t fit. 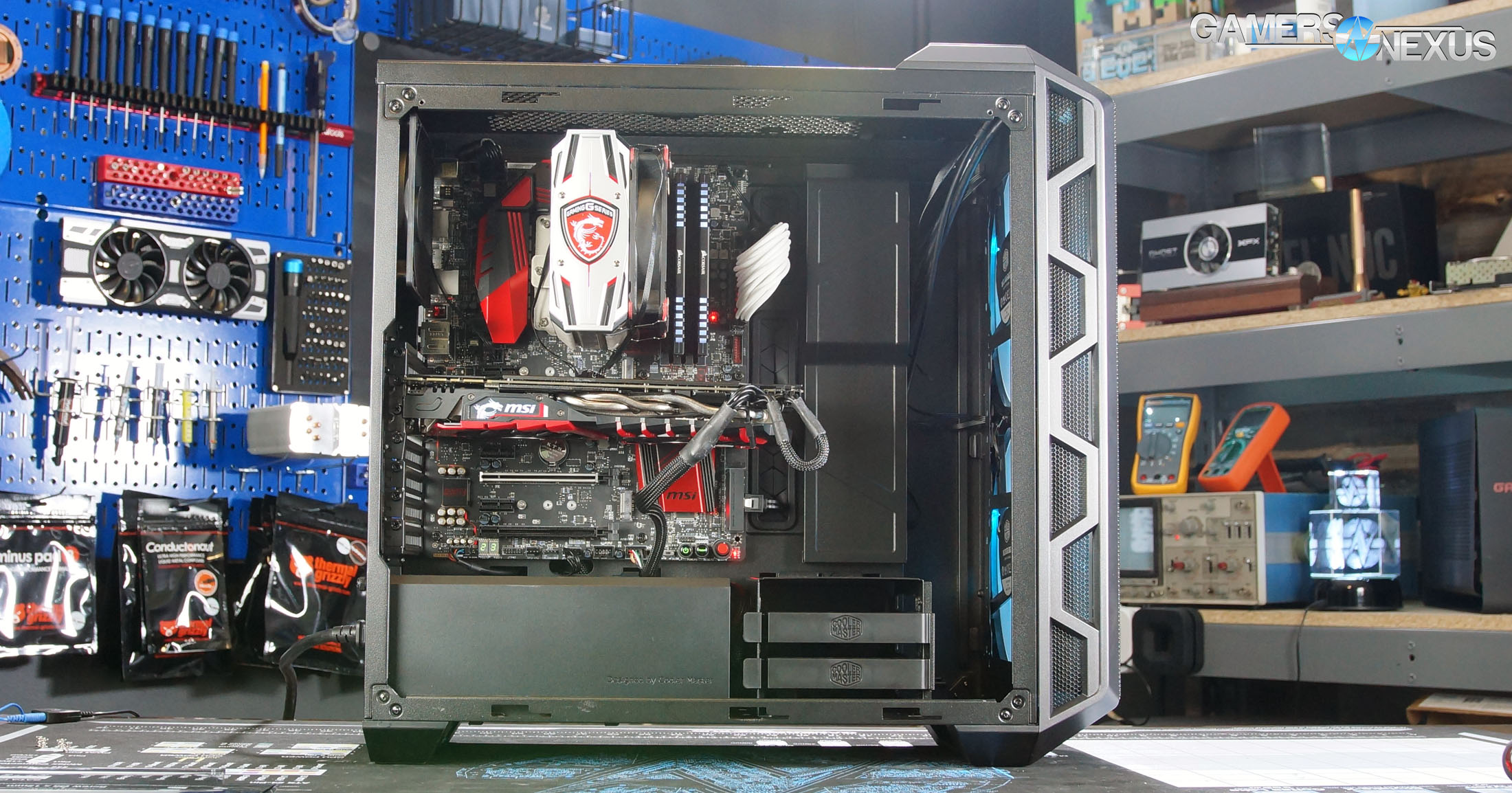 The launch H500P had a finicky shroud that needed to be removed in order to install the PSU, and that’s been improved in subsequent revisions. The H500’s is one of the best so far, and probably the cheapest as well. It’s made of plastic rather than steel and only covers about half of the bottom of the case, which is great--heat isn’t trapped in the HDD cage and air from the front intake fans isn’t stolen by the shroud, but it’s still long enough to fully hide power cables. The whole thing slides out with the removal of a single thumbscrew. The hard drive cage is unobtrusive and the easiest place to install any drives, but for those who really want to clear out space it’s also removable with a single thumbscrew and there are two more 2.5” mounts behind the motherboard.

Cable management clearance is good behind the motherboard, and it needs to be because of the limited room in the half-shroud. There are tie points and cutouts absolutely everywhere, and the cable management bar is as good as it has been on the other models. Cooler Master has omitted the plastic cover for the CPU socket and the steel cable-cover-thing this time around, and that’s another good call, especially if it’s helped lower costs. Side-by-side comparison reveals various other tweaks that make it seem like Cooler Master took a step back, considered what was really necessary, and stripped the rest out.

The tempered glass side panel has a big metal lip at the bottom to keep it from falling out, and we like the use of screws instead of the latch that other H500X cases use (although they’ve  worked fine post-H500P). It seems like someone at Cooler Master is sincerely dedicated to using those flathead not-thumbscrews, though, so a screwdriver or a coin is necessary to open the case.

Ventilation throughout the whole case seems great, but we’ll put that to the test in the thermal section. The top panel is a flat sheet of steel, almost entirely ventilated, and without the plastic cover on top that other H500X cases have. Oddly, the PSU filter is much narrower than it was on previous H500Xs, but it should still be sufficient.

Thermal testing was simple this time around. The stock configuration makes sense and we’ve done plenty of experimentation with the 200mm fans already in the other H500s, so the only additional test we did was to swap in the acrylic front panel. 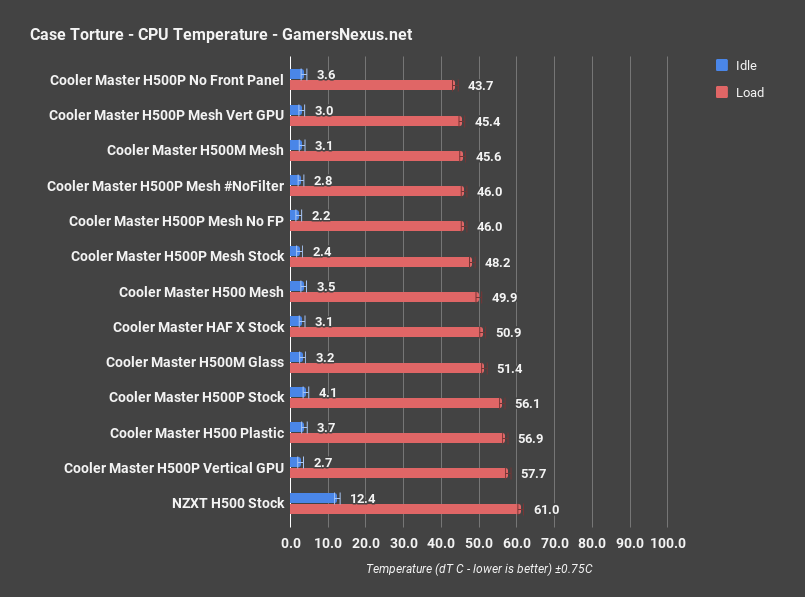 CPU dT was 49.9C during the torture test, which jumped up to 56.9C dT with the acrylic front panel. We’ve driven this point into the ground over past reviews, but the unventilated front panel forces the 200mm fans to draw air in at a 90 degree angle from the sides, which is more difficult. Large, slow-moving fans also tend to have low static pressure. Putting mesh rather than acrylic in front of the fans allows them to reach their full potential. 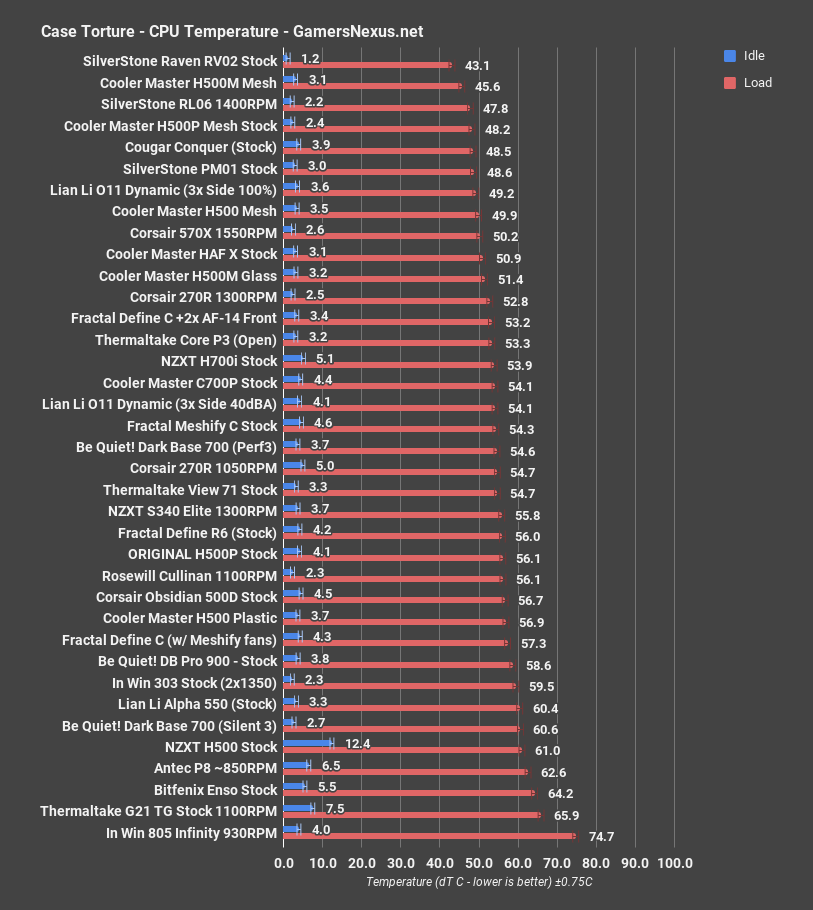 GPU dT averaged 48.5C during torture testing. This increased even more than CPU dT did with the acrylic panel, up to 57.9C dT. With less air coming in the front, airflow could be biased towards the exhaust fan behind the CPU, leaving a dead zone at the bottom of the case. 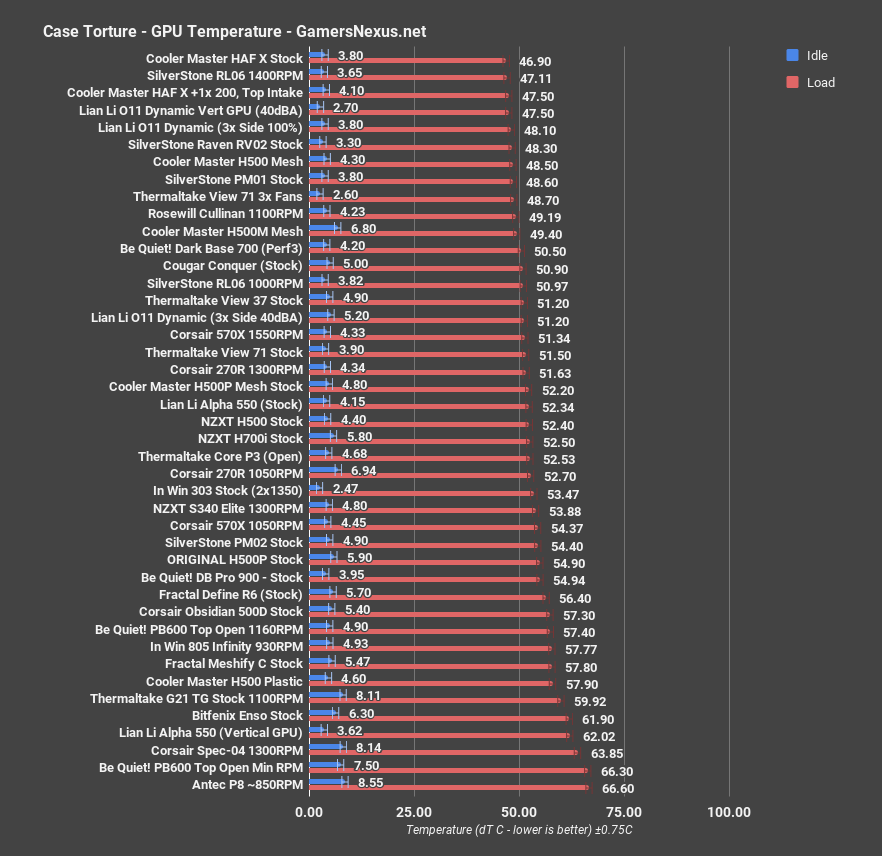 48.5C dT for the H500 is the best GPU temperature for an H500X case so far, probably because of the half shroud. Even though there’s an HDD cage directly in front of the bottom intake fan, it’s still less of an obstruction than a full PSU shroud which blocks or steals a significant portion of the incoming air at the bottom of the case. That puts the H500’s GPU cooling on the level of some of our favorite cases, like the PM01 and RV02. Obviously using the acrylic panel ruins that, putting it closer to the 805i Infinity. 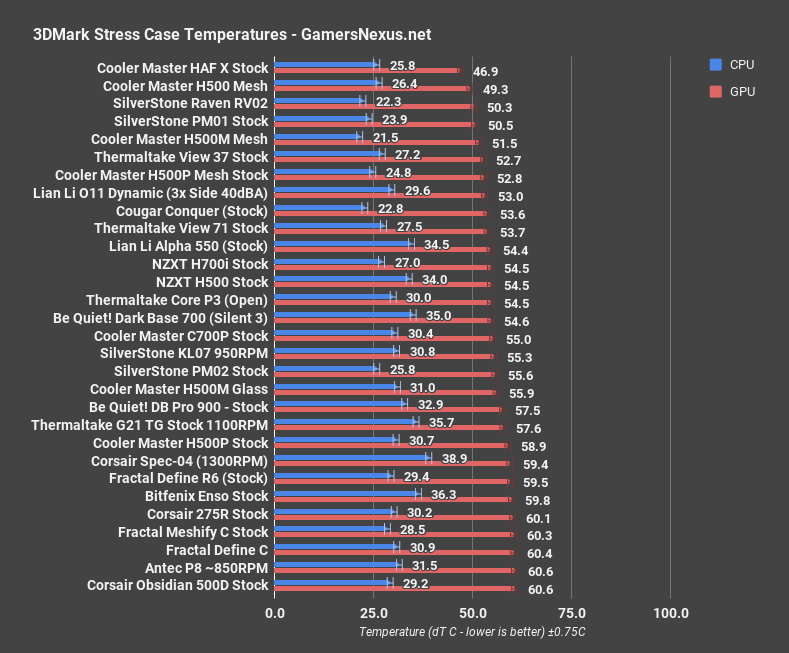 The 3DMark Firestrike Extreme stress test resulted in an average GPU dT of 49.3C, lower than anything else on the chart except the HAF X, which had a side intake fan pointed directly at the GPU. GPU temperatures are the main performance advantage the H500 has over the H500M and H500P Mesh, which are fairly similar except for the PSU shroud. 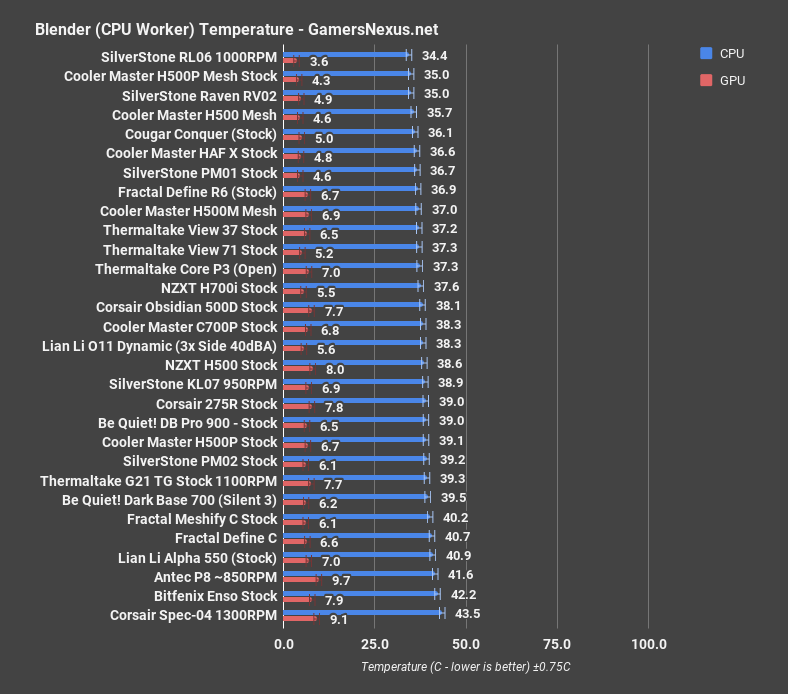 Rendering on the CPU put the average CPU dT at 35.7C, cooler than most other cases on the chart and just about equal to the H500P Mesh and the open-air Cougar Conquer. 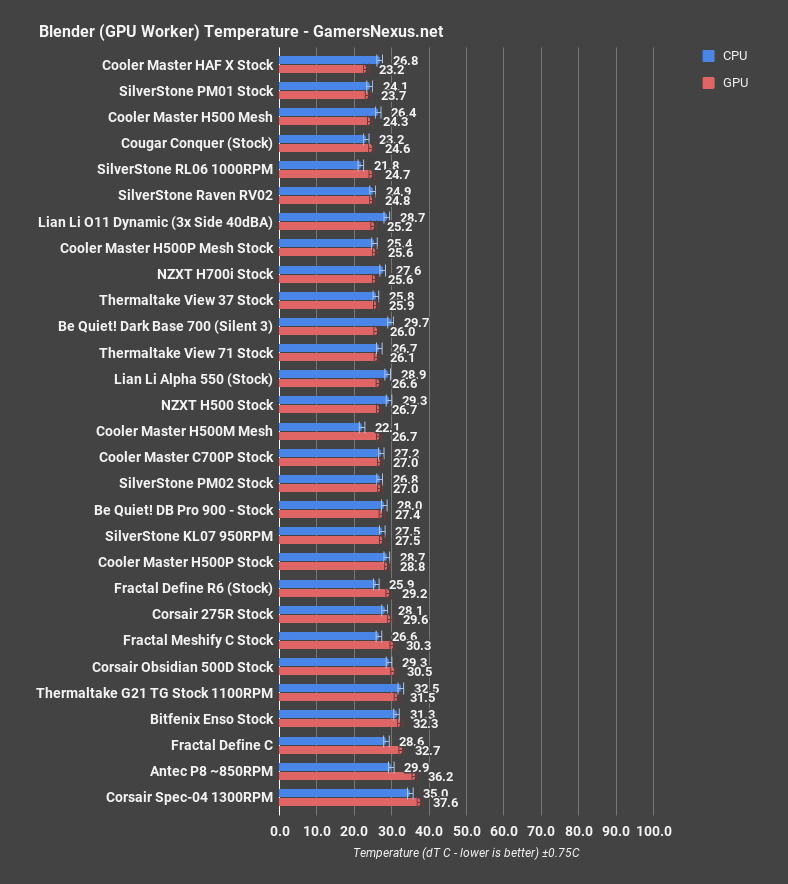 GPU rendering only raised GPU dT to 24.3C, also one of the lowest temperatures on the chart and again similar to the Cougar Conquer. It beats the H500M and H500P Mesh here. 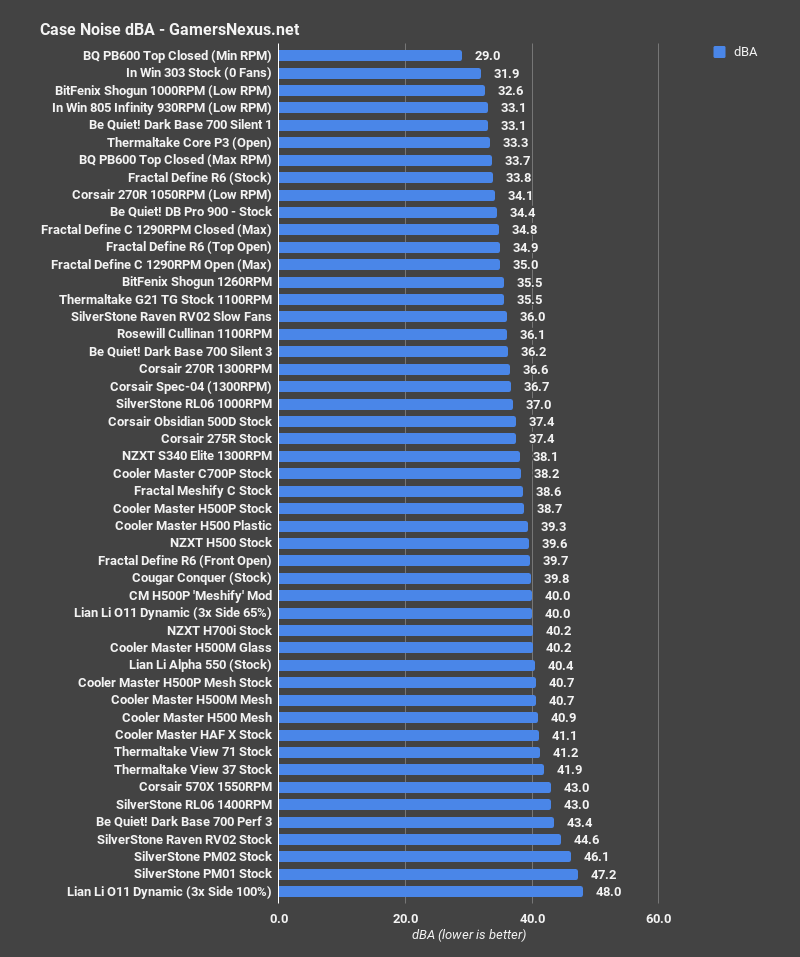 With and without mesh, the H500 falls exactly where it should on the chart. 40.9dBA with the mesh front is on par with the H500M and H500P Mesh, while 39.3dBA is right between the H500P and H500M with a glass front panel. All of the H500X cases we’ve tested fall in a fairly narrow dBA range towards the upper end of our scale.

We poked fun at it earlier, but naming this case the “H500” will prove to be a smart decision down the line. We made such a fuss over the H500P largely because Cooler Master associated it with their still-popular HAF (high airflow) brand, despite overall subpar cooling. Calling this new case “H500” (without a suffix) implies that this is the base model, and the H500 is closer in looks and cost to the classic mid-range HAF cases than the H500P or H500P Mesh or H500M have been.

MSRP for the H500 is $100, which is $50 less than the H500P was at launch--although at the time of this writing, it’s also on sale for $100 on Newegg. The H500P Mesh is a case we highly praised, also at $150, and the H500 is 80% of what the H500P Mesh is, with a steep price reduction. We can strongly recommend the H500 at its price-point. If you wanted the H500P Mesh but found it too expensive, this seems to be the price-break. Thermals are good, the price is good, and Cooler Master includes two options for the front panel. It’s hard to imagine many being dissatisfied with this case, unless they take issue with its appearance.