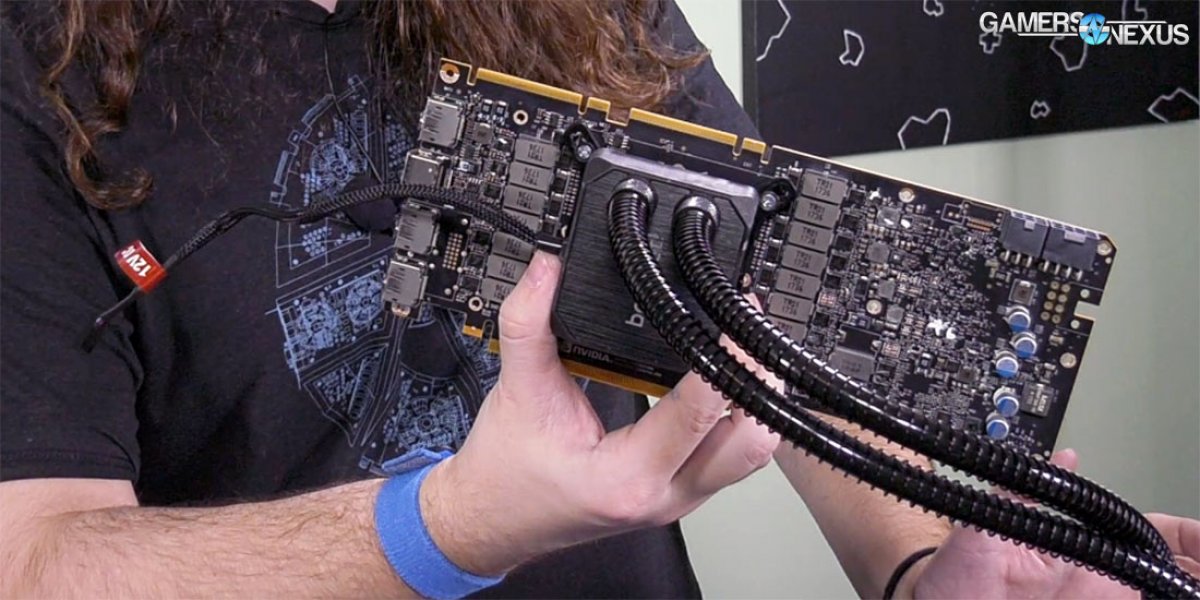 This coverage looks at a recap of our Titan V Hybrid Mod, including frequency to thermal response, stock air vs. liquid GPU performance, overclocking differences, and gaming uplift.

Let’s start out with a frequency analysis of the core for the Titan V. For this chart, we’re looking at how additional thermal headroom gives us better boost clocks, and sustains them for longer when under heavier loads. This is over a period of roughly 25 minutes for a Firestrike Ultra burn-in, where we freeze frame on an intensive scene. We haven’t applied any overclocks – these are stock settings, aside from the cooler on the Hybrid.

The air-cooled card starts off with a clock of about 1810MHz, and rapidly drops down to a range of 1600-1700MHz, dictated by thermals. You’ll notice that the GPU temperature sits steady at 83-84C, which is the point at which Boost 3.0 encounters a thermal barrier.

Updating charts to show the Hybrid, you’ll notice immediately that we have a higher boost frequency, which is what we want – it is also a direct result of the improved cooling solution. We’re at around 46C for our GPU core temperature now, as opposed to 86C, and we’re plotting around 1800MHz average. The air-cooled card averaged closer to 1700MHz. That’s a big uplift for just a cooler swap, and would be even bigger if we had pushed below 40C. 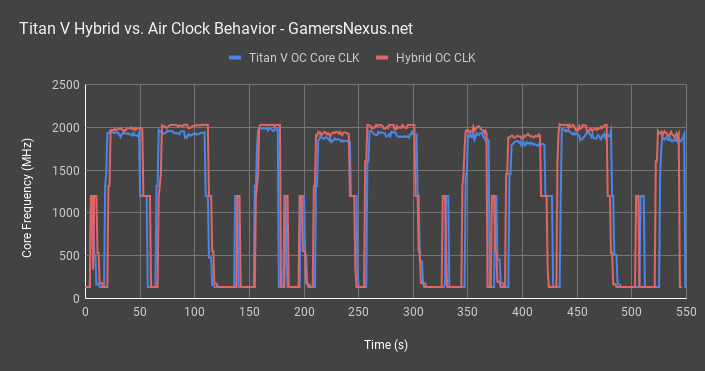 To illustrate how this comes into play in briefer synthetic tests, this chart shows frequency over time during a looping, scripted 3D Mark suite. Both tests have a 200MHz core and HBM2 offset applied. We even gave the air-cooled card some help, primarily by setting its blower fan to 100% speed, or about 60dBA of noise. The difference is, again, that the liquid-cooled card manages to consistently sit at or above 2000MHz, frequently hitting 2032MHz peak. The air-cooled card, meanwhile, has harder drop-offs throughout longer tests – we can see this more toward the last few spikes – and tends to sit about 100MHz behind the liquid-cooled card. And, again, that’s with its fan at 100%. 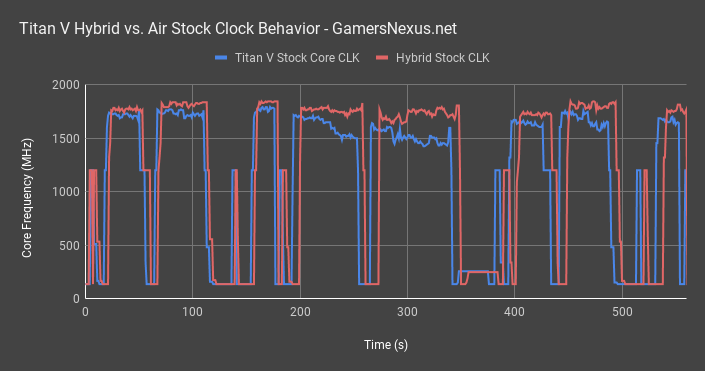 If we look at some results of the card with its fans and clocks restored to complete auto, including the fan speed that’s a bit too low by default, we see even bigger swings. The frequency fall-off as testing goes on is more noticeable, and we start to lose clocks to the tune of a few hundred MHz, in worst cases. Liquid cooling is removing that thermal barrier completely, and instead putting us up against power barriers.

Speaking of power, let’s look at voltage change. This is measured by probing the capacitors on the back of the card, which tells us the actual input voltage for the GPU, rather than some inaccurate software measurement.

We saw a pretty big swing in voltage range after applying the Hybrid mod. Removing the thermal cap meant that the card would permit itself to draw more volts, which we see reflected in this table of minimum and maximum measured voltages.

Stock and with air, we saw a range of 0.75V to 1.093V, the long-known max for nVidia. HBM voltage sat at around 1.434V. Overclocking and overpowering the air-cooled card got it to 0.98V average, lower than the previous 1.093V maximum. This is because we were bumping hard against thermal limitations, causing the card to throttle back. HBM voltage was a bit higher, by nature of giving more power to the HBM, and also because the HBM wasn’t under as much duress as the core. HBM2 has low heat flux, and can deal with the heat better than the GPU core can.

The extra voltage is a major help, and explains why clock stability is so much better when removing the thermal throttle.

Above shows various measurement points for Titan V voltage, as used for our above table. 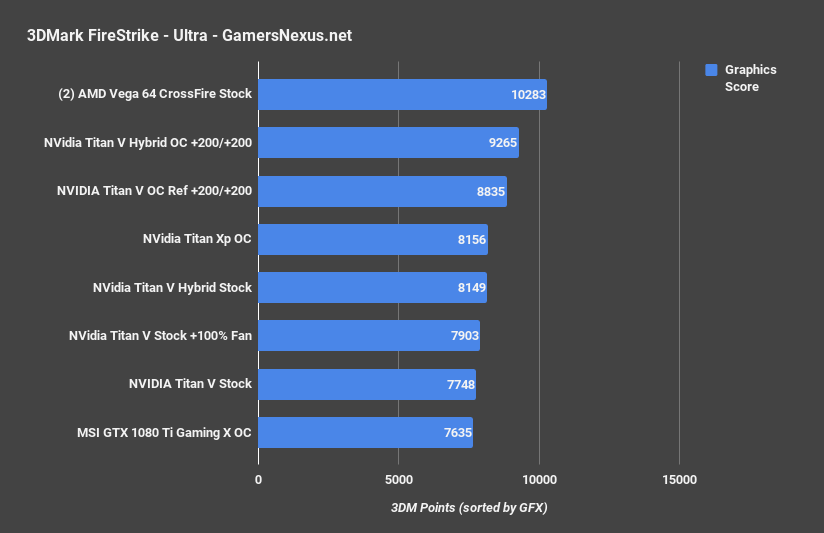 As for scores, we saw these improvements in Firestrike Ultra: Highlighting first the full-stock, air-cooled card, we scored 7748 points for graphics, with the stock-clocked Hybrid scoring 8149. That’s already an increase of 5.2%, which is remarkable, considering it’s just a cooler.

Overclocked on the air-cooled card, we were at 8835 points, or 9265 on the Hybrid mod. That brings us another 4.9% ahead of the air-cooled overclock. 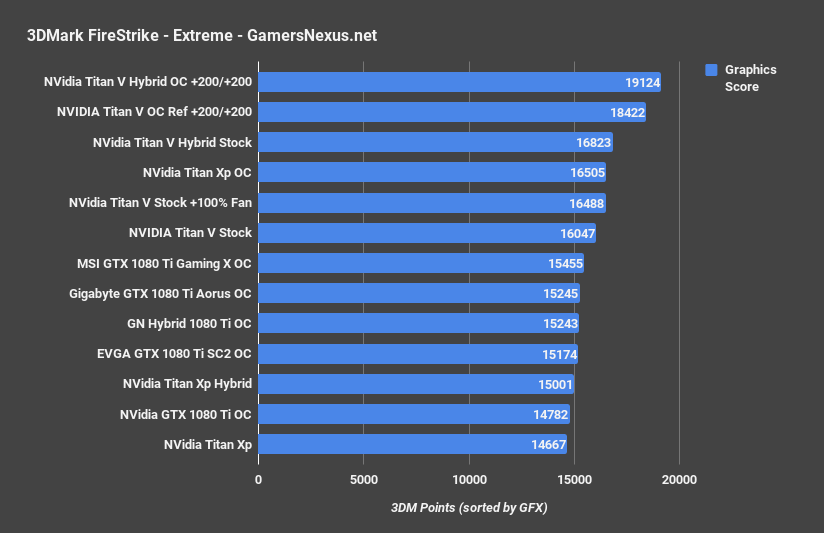 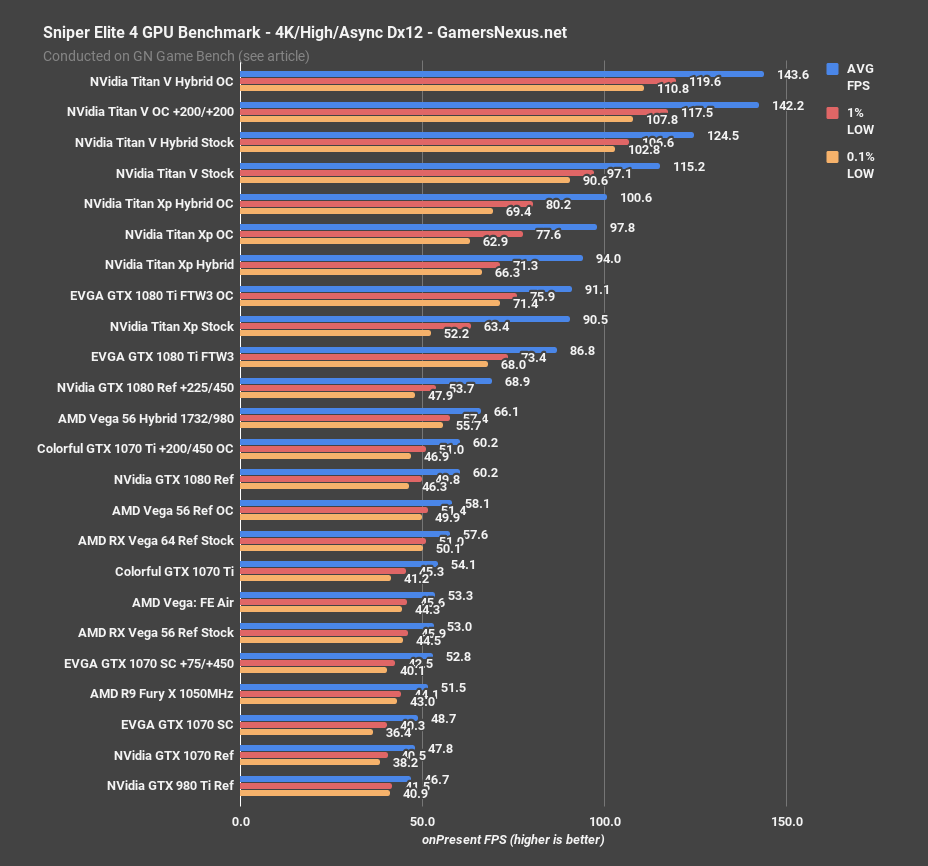 Sniper Elite 4 gives us a real-world sample, and shows the stock Hybrid at 125FPS AVG, versus 115FPS AVG on the air-cooled card. That’s a gain of 8.1%, somewhat remarkably, and is a testament also to how sensitive Sniper Elite is to clock stability.

The overclocked card pushes only marginally past where the air-cooled overclock sat, partially because we begin bumping into CPU limitations.

The mod was definitely worth putting together for our purposes, though we don’t foresee many $3000 video card purchasers modding for liquid cooling. The takeaway is that, as usual with nVidia cards, there is significant (~5%) performance headroom to be gained from a liquid cooler, and that’d only go further had we gotten ambient lower, or used a cooler capable of sub-40C GPU diode readings. We saw ~8% gains in asynchronous compute tasks, like Sniper Elite, further illustrating the heavy impact of clocks in specific titles and applications. Other titles, like Destiny 2, don't care quite as much about clocks as Sniper and DOOM appear to.

We’ll soon be restoring the card to its original condition, primarily because storing a Hybrid card is difficult enough, and storing a $3000 unit in this state is just asking for damage related to movement or logistics. Regardless, were it to sit inside a system, we’d leave it in the modded state.

Before that, though, our next step is to perform the shunt mod, hopefully determining whether we can trick the GPU into pulling more current than it thinks it does. We’ll explain how this works in our shunt resistor shorting content.